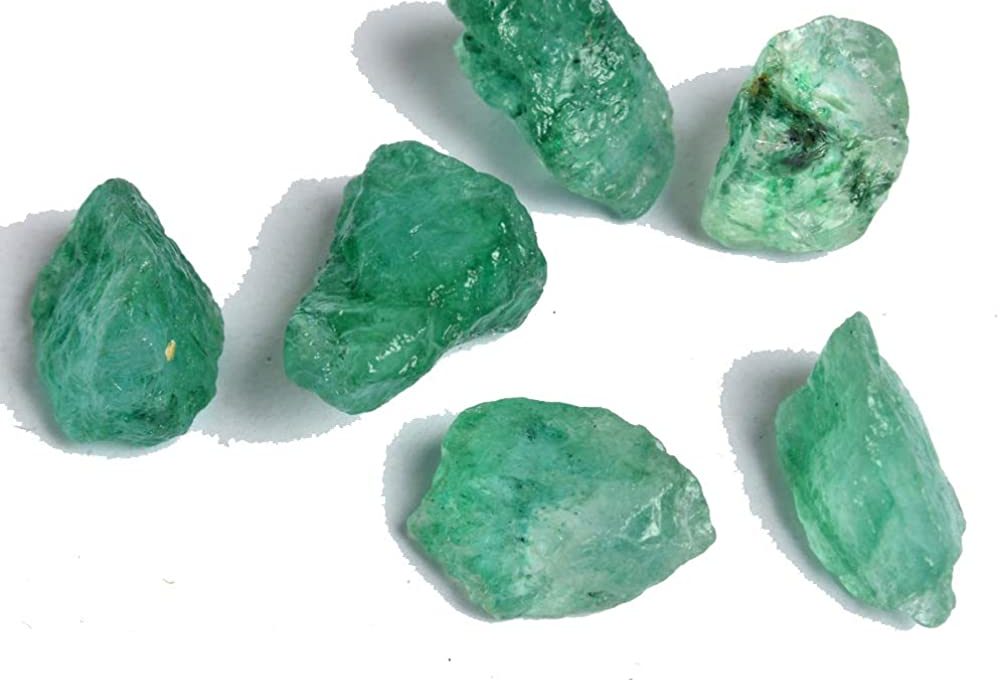 Emerald has been treasured for many thousands of years. Known to soothe and comfort the soul, those born in May are extremely lucky to be able to call emerald their birthstone, in all its stunning green richness. A perfect stone to see in the peak of Spring, a time of renewal and rebirth which emerald has long symbolised. The most famous member of the beryl family, alongside pale blue aquamarine and peachy pink morganite. It has captured hearts and minds throughout the ages and was considered a remarkable stone ever since its discovery in ancient Egypt in 1500BC.

The word “emerald” is derived via Old French: esmeraude and Middle English: emeraude), a variant of Latin smaragdus, via Ancient Greek: σμάραγδος meaning “green gem”. It is the gem of the twentieth and thirty-fifth wedding anniversaries. The oldest emeralds are the South African variety and date back an incredible 2.97 billion years. Emerald is 7.5 to 8 on the Mohs scale and has fair to good toughness, making it a stone that requires more care in wearing than ruby or sapphire. Even so, emeralds are wonderful stones for all types of jewellery and with proper care will last for generations.

Rare and beautiful, emerald was regarded by the ancients as a superior stone. Known as ‘The Jewel of Kings’ and worn as a symbol of status and power. Royalty and the elite have revelled in emeralds throughout history. Cleopatra, famously fond of this majestic green stone, amplified her passions with the way she heavily adorned herself and her palace and gifted foreign dignitaries hand carved emerald tokens. The first known emerald mines were in Egypt, dating from at least 330 BC into the 1700s, not far from the Red Sea. This mine was claimed by Cleopatra as her own, taking it from the Greeks. In 1817, the ‘lost’ mines of Cleopatra were rediscovered however unfortunately the emerald supply had long been exhausted.

In ancient Greece and Rome, emerald was associated with Goddess Aphrodite/Venus; purveyor of beauty, love and hope. The stones purity was believed to have been so strong that evil was unable to exist in its presence. It symbolises fertility and immortality and when worn as mystical talismans Romans believed it would protect lovers from unfaithfulness. A stone of inspiration and infinite patience, it is said to embody unity, compassion and unconditional love. Rome’s Pliny the Elder (a Roman academic) described emerald in his Natural History, published in the first century AD as: “…nothing greens greener”. He also went on to say “And after straining our eyes  by looking at another object, we can restore our  vision to normal by gazing at an Emerald”. He was not a big believer in mystics although he had a clear adoration for this exceptional green stone.

Thailand’s most sacred religious icon is called the “Emerald Buddha”, even though it is carved from jadeite.

The largest collection of emeralds is said to be the crown jewels of Iran. Even the royal Nadir Throne is adorned with 1500-2000 emeralds.

Emeralds were discovered in South America in the 16th century by the Spanish. They were used by the Incas well before this discovery.

The Spanish traded emeralds across Europe and Asia for precious metals, which opened up the emerald trade to the rest of the world.

Colombia yields the largest amount of emeralds, contributing to more than 50 percent of all emerald production worldwide.

Emerald at The Northcote Jeweller