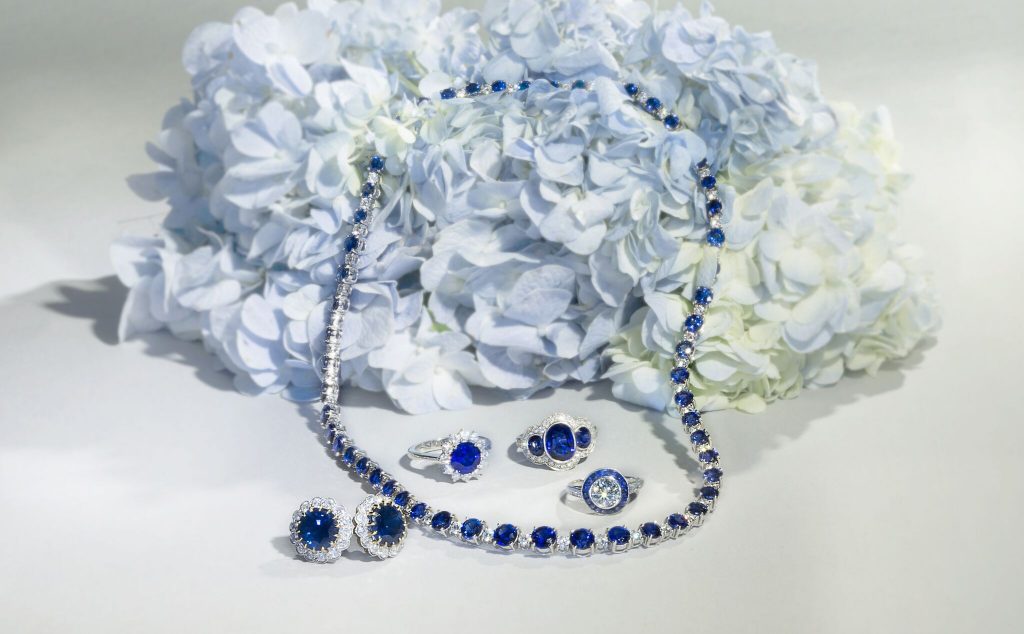 September babies are lucky enough to call deep blue royal Sapphire their official birthstone. It belongs to the corundum family alongside fiery red ruby. Besides blue, sapphire comes in an array of beautiful colours; pink, yellow, orange, purple and intermediate hues. ‘Now, contemporary designers arrange fancy sapphires in stunning rainbow suites.’ (Source: GIA) They even present the phenomenon known as colour change, commonly going from blue in daylight or fluorescent lighting to purple under incandescent light. They can even present in grey, black or brown. Blue, black, grey and colourless sapphires are just called sapphires whilst other colours have a prefix such as ‘pink sapphire’, also known as fancy sapphires. Cornflower and Kashmir Blue sapphires are the most highly sought after of all the sapphires. We have some stunning examples at The Northcote Jeweller

Padparadscha Sapphire is a combination of pink and orange coloured sapphires resulting in a beautiful peach hue named after a exquisitely coloured lotus flower. This beautiful form of sapphire is highly rare and highly sought after, which is reflected in market price. Sapphire immediately evokes visions of royalty and princesses, most famously, Diana and Kate Middletons engagement rings. Also featured on crowns and other worldly royal jewels. Diamond may be the top dog of the gemstones but royal blue sapphire leaves one in a state of deep desire.

Sapphire immediately evokes visions of royalty and princesses, most famously, Diana and Kate Middletons engagement rings. Also featured on crowns and other worldly royal jewels. Diamond may be the top dog of the gemstones but royal blue sapphire leaves one in a state of deep desire.

The Leuchtenberg Sapphires below are one of the grandest sapphire sets in any royal collection! The sapphire and diamond parure is owned by the Swedish royal family. It’s possible that the set was given as a wedding present in 1806 to Princess Augusta of Bavaria by Napoleon Bonaparte, her groom’s stepfather. Augusta’s daughter, Josephine of Leuchtenberg, brought the set with her when she married the Swedish king, and the sapphires have been with the Swedes ever since. The set includes a massive diamond and sapphire tiara, a necklace, a pair of earrings, a brooch, and a set of hair ornaments.

What is the spiritual meaning of Sapphire?

The history of the sapphire, dates back to the Etruscans in the 7th Century BC. Throughout the ages, sapphire has been known to affect different aspects of spiritual and physical well-being.

Blue sapphire is best known to represent honesty, loyalty, faithfulness, truth, wisdom and sincerity hence why they are considered perfect engagement ring centre stones. Fit for the princesses themselves. The coloured sapphires have further benefits.

Orange sapphires can be very empowering for creative people, writers, singers, painters, potters and poets. They will fire up your vitality, increase your sexual energy and virility and enhance your fertility.

Just along the color spectrum, yellow sapphires share some of the orange sapphire attributes, bringing the power of the sun into your life as well as wisdom, prosperity and positivity.

Green sapphires are the traveler’s stone, keeping you safe on journeys and will open your mind to the beauties of the world around you.

Black sapphires are the working man’s stone whether you are seeking a job, planning a change of career or hoping for a promotion this is your talisman.

White or colorless sapphires are the gemstones of spiritual power, connecting us to higher divinities and guides. It will help you overcome any feelings of losing faith.

Purple sapphires are perfect for those facing a forced lifestyle change. Perhaps a recent healthy scare has made you realize that a new fitness regime is needed, purple sapphires will give you the determination to stick to your plan.

The colors of sapphires are caused by mineral impurities within the stone, for example titanium and iron create the blue in blue sapphires. The presence of these mineral elements can also influence a person spiritually. Iron strengthens and energizes the body, titanium calms stress and anxiety and chromium encourages independence.

Historically, sapphires are known as gems of wisdom and prophecy, a sign of divine support and an aid in resisting black magic and psychic attack. It would safeguard honor and chastity, uncover fraud and betrayal and offer protection against plague, poison and disease. However as a righteous gemstone it would become dull if possessed by an irreligious or intemperate person.

WhatsApp Chat is free, download and try it now here!